I just came back from a three day trip of Ireland, first off I’ll start by saying that you should definitely plan on staying longer, because Ireland is a relatively small country you can experience it’s major cities and sights in a week including Northern Ireland. However, if time is not by your side and three days is all you can do here is great way to get the most out of your vacation.

Ireland is full of natural and extraordinary places surrounded by greenery, farm animals and charming cities. The coasts of Ireland are inexplicably dynamite with geological features that are so stunning to the eye it’s almost like stepping on extraterrestrial terrain.  See Extraordinary Highlights of Ireland and Northern Ireland .

Originally I was planning on just visiting Dublin considering it’s one of the most known cities in Ireland. So I booked my stay at the Harding Hotel located in Viking/Medieval area of Dublin. The area was culturally impressive with colorful pubs and the Christ Church Cathedral at my window. The perfect pinpoint for getting anywhere in Dublin.

I arrived in Dublin a little past noon, it was a gloomy and cold day. But I was in Ireland so the excitement outdid the weather. Because I knew I would only be there for three days I quickly put on my walking shoes, strapped my camera and took off on an Irish adventure.

I had purchased a Freedom 3 Day Adult Bus Pass through Airlink Express at the airport which included a free ride to and from the airport , an all Dublin Bus transportation including the Dublin Sightseeing Hop On Hop Off Tour all for 33 euros.

So I hopped on the first sightseeing tour bus and took an entire tour of Dublin. I learned of the history of each location and got a great layout of the city. Afterwards, I hopped off at O’ Connell Street and spent the rest of the day walking throughout the city; eating, shopping and taking in the Irish air.

The next day I woke bright and early and headed off to my pick-up point at Merchant’s Quay for the Cliffs of Moher, Wild Atlantic Way, Atlantic Edge Ocean Walk and Galway City tour with Wild Rover Tours.

I had booked this tour a month prior to my trip and I was extremely excited to see the outskirts of Ireland and or course the cliffs. But the day turned out to be far more exhilarating than anything I had imagined. 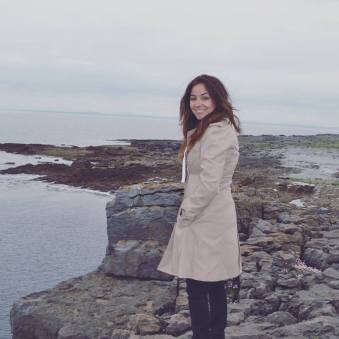 I knew that Ireland would be beautiful, at least I hoped it be but what I learned my first day there was that it was far more than just beautiful. It had treasures, it had sights I didn’t even know existed. And as I stood on top of the Cliffs of Moher with the wind bustling all around me I knew that I made the best decision ever, visiting Ireland was more than a getaway it was a gift.

I spent the day admiring all of our stops including a visit to The Burren and when we weren’t on our feet I stared out the bus windows looking at all the animals and all the different views of the Atlantic Ocean. It was superb and relaxing.

Our last stop before heading back to Dublin was Galway City. The colorful university town was perfect for enjoying a nice Irish meal and of course some souvenir shopping.

After the jam-packed day I had, I decided to book another tour. This time I wanted to cross the border over to Northern Ireland and visit Belfast. Unfortunately, Wild Rover Tours was booked for this specific tour so I booked a tour with Paddywagon.

This time I was picked up on Suffolk Street and taken to our first stop, the Dark Hedges. These are famously known for appearing on HBO’s hit TV show Game of Thrones. The trees have been there since the 1700s after the Stuart Family planted them. However, it is said that on foggy, gray days you could see a woman walking through the trees. 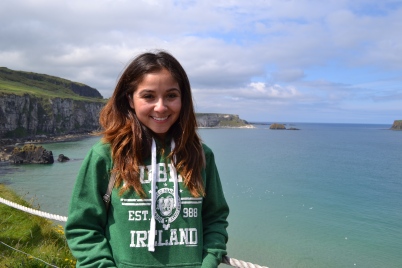 After a few minutes at the Hedges we headed over to Carrick-A-Rede, this for me was one of the highlights of the entire trip. It was stunningly beautiful, and it’s majestic presence was worth the hike over to the rope bridge. The shaky bridge built by fisherman over 350 years ago was used for catching migrating salmon. The rope bridge is 30 meters above the sea and is major spot for tourists who want to experience the area just like the fisherman.

Then we headed over to the Giant’s Causeways, one of the magical locations in Ireland. With 37,000 basalt columns used as stepping stones it’s a fun and enjoyable evening spent marveling over Earth’s fascinating formations.

Then before heading off to Belfast we made a quick pit stop at what is considered one of the most romantic castles in Ireland, located on top of a cliff sits Dunluce Castle, it’s sandy brown shade is perfect for catching sunsets.

After a long day of sightseeing we finally stopped at Belfast city. With only a few hours in the city I was able to explore the city’s local food market and you guessed it enjoy some good Irish food.

After that we headed back to Dublin.

My three days in Ireland filled me with countless memories, moments I will never forget. But truth is Ireland needs more than a few days to be unfolded and discovered. With so many breathtaking views it was enough for me to want to go back. If I had more time I would have gone to Kerry, I would have seen the Wicklow Mountains and more. I do suggest that if you go to Ireland don’t just stay in one city you’ll quickly notice that they thrive on tourists specifically in Dublin, which means there are many day tours you can take to any part of Ireland. And through my experiences with the day tour companies they were both professional and organized. Not only was it easy to get around I learned a lot more about Ireland and it’s culture. 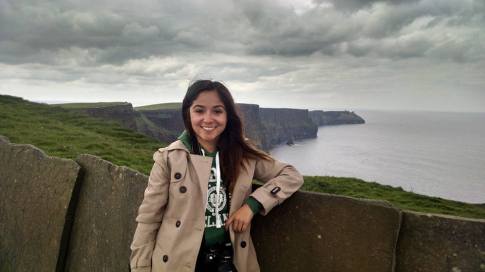 Thanks for reading all! And happy safe travels!