Open all year round, the Virgin Islands National park is a dreamy escape for a well deserved getaway. Known for its blue waters, white sandy beaches and tropical forests it’s  a gateway to tropical paradise. 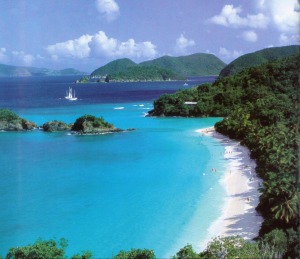 It’s part of a chain of islands located in the Caribbean on the Atlantic Ocean, it lies East of Puerto Rico  and West of the British Virgin Islands. Three main islands comprise this area, the largest being Saint Croix, then Saint John followed by Saint Thomas; smaller islands surround them as well.

Activities include scuba diving, snorkeling, paddling, sailing, windsurfing, fishing and hiking. The best time to visit is between December through mid-April.

Grand Teton National Park is for adventures and great views. This is a perfect place for couples because the scenery is none like any other- it’s giant peak mountains , grassy fields, lakes and snake river make it an unforgettable sight. The greenery compliments the mountains and the water acts as mirror; reflecting the peaks fine features.

The park was named after the tallest mountain in the Teton Range by early 19th century french fur trappers. With over 1,000 campsites, and 200 plus miles of hiking trails, Grand Teton National Park is not one to miss.

The peak season for tourists is between May and Sepetember

If your planning a honeymoon to Hawaii, your already in good hands. However, the vision that is Haleakala is like stepping out of planet Earth and stepping into a new planet. One part of of the park is  the Haleakala summit, which features roughly two miles of red rocky slopes, the lower region is Kipahulu, which is where you find most of the wildlife and waterfalls.

Activities include hiking, horseback riding, swimming, bird watching, and biking. The park is open all year long unless weather prevents it. Most tourists come between December and April.

Glacier National Park highlights the colors blue, green and white making it one of the most beautiful places in all of the United States. This is the place where couples can bask in the beauty and serenity that nature brings.

Campsites and lodging are available at the park and has dozens of trails for all types of hikers. Other activities include biking, fishing, horseback riding,boat and bus tours,snowboarding and skiing.

The park is open all year round unless harsh weather prevents it. The peak tourists months are from late May to September.